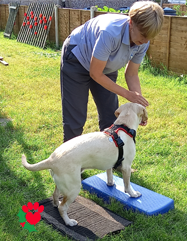 The progress Holly has made over the years would not have been possible without the wonderful team of experts she has around her. 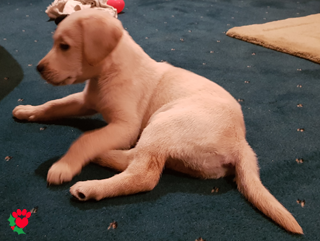 Holly has been surrounded by a great team of people who have had her needs at the centre of each decision and offer of advice made regarding Holly’s health and well-being.

Holly first met (Auntie) Jules from Labrador UK Action Group when she was two months old. Her breeder had contacted the registered charity knowing that Holly wasn’t able to be a working dog due to her disabilities and wanted to see if Holly could be given a chance at life and a good home.

Labrador UK Action Group (LUKAG) are a national charity that does not use kennels whilst rescuing and placing a Labrador in a new home. They match a Labrador with a new home in a superb way which means that most Labradors go from their current situation into their new homes, without the need for another environment in between. 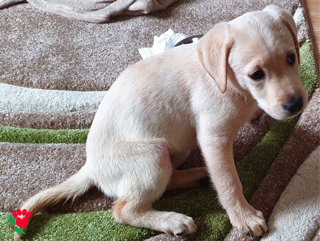 Sometimes, like in Holly’s case, the rescue charity decides that it’s in the best interest of the dog to be fostered by the charity first. For Holly, this meant that the charity could assess Holly’s needs, and get her checked out by the vet to get a full understanding of her condition and prognosis. Time with Holly meant that LUKAG could monitor her progress and see exactly what Holly needed in her new home. The amount of love and care for Holly and all the other Labradors that Labrador UK Action Group give is overwhelming – and it doesn’t stop when a dog is re-homed.

The amount of ongoing support we receive for Holly is outstanding. We know that they are only a phone call away for great advice or a bit of emotional support and are very much part of the team around her.

Another member of the team is Debenham Veterinary Practice. Holly was taken to them by LUKAG when she was two months old. Debenham Vets diagnosed Holly with Cerebellar Hypoplasia and said she was not distressed or in pain to give her a chance at life. When Holly came to us, we continued to have Holly’s veterinary care with Debenham Vets. Holly has regular health checks with them, where her body condition is checked, her nails are clipped and she receives any due vaccinations. She is also given a lot of fuss and love as they are always so pleased to see her, which Holly absolutely thrives on. Holly has been seen for other complications. that may possibly be associated with Cerebellar Hypoplasia.

It was suggested by both Labrador UK Action Group and Debenham Veterinary Practice that Holly was seen by Claire Lawrence McTimoney Animal Therapist based in Norfolk. A referral from Debenham Vets was sent to Claire and Holly’s journey with (Auntie) Claire began.

Claire has a Master’s Degree in Animal Manipulation and uses the McTimoney chiropractic technique on both dogs and horses. Her treatments improve the comfort, well-being and general health of an animal. McTimoney chiropractic can help with many musculoskeletal problems, focusing on misalignments of the spine and pelvis that can cause muscular tightness, pain and stiffness. Claire’s treatments gently readjust misalignments and stimulate nerves helping to initiate the healing process.

Holly’s progress has been greatly improved by Claire’s knowledge of the dog’s anatomy and how Holly’s condition affects her musculoskeletal system. From the start, Claire has been able to give us advice on what exercises would be good for Holly to do. These exercises would help her posture, and balance and would strengthen Holly’s muscles and joints. Claire’s work is also very reassuring for us as Hooparents, as we do get concerned when Holly stumbles or falls.

Claire is able to identify if Holly has had a bit of a bump that is causing her problems. We always feel reassured if Claire gives Holly a clean bill of health, or if there is an issue that Claire is able to treat whether it be just one treatment session, or over a few sessions. We also visited Claire when we were concerned about an injury. Holly was seen by Claire due to her left hip not being right. She didn’t seem to be in pain but she wasn’t sitting and lying as usual. Claire assessed Holly and there was a misalignment that Claire was able to identify and adjust. Holly was considerably better after her treatment.

Due to Cerebellar Hypoplasia and Holly holding herself and having a different type of walk compared to other dogs without CH, it could be deemed that Holly would be more susceptible to conditions like arthritis in later life. Therefore, Holly’s visits to Claire are essential to minimise the chances of additional complications as Holly gets older and identify any complications at the earliest opportunity. Holly gets very excited when she sees Claire, we always feel there is a difference for Holly, and that the treatments and exercise advice we receive from Claire help with Holly’s current needs and her needs later on in life. 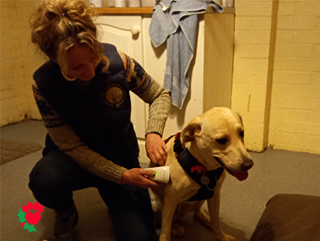 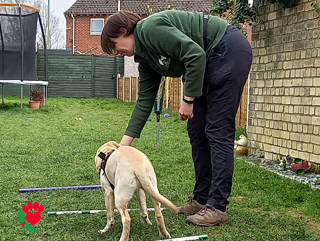 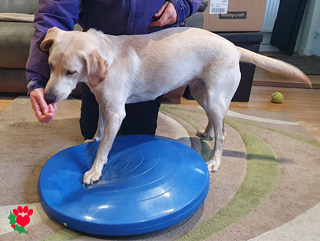 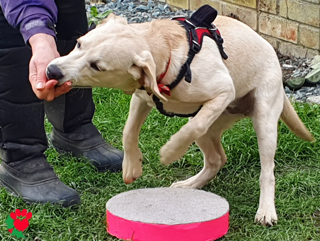 Caroline Bennett from Look Forward Dog Training and Behaviour has also been a fabulous and inspiring member of Holly’s Team. (Auntie) Caroline is a Pro Dog Trainer with Absolute Dogs and has a wealth of knowledge and experience in dog training and behaviour. She has been a Trainer for The Dog’s Trust and has worked with many dogs with disabilities. Caroline’s tagline is “Every dog can reach it’s potential with a little help”. This was so evident when Caroline first met Holly, Caroline could see Holly’s determination for life but also her determination to overcome the obstacles in her life. Caroline had a clear view of what she would like to do to support Holly. Holly’s training happens every two weeks, on a one-to-one basis and started when Holly was just over 5 months old. The training takes place in the morning as Holly’s energy levels are always better after a good night’s sleep. Caroline incorporated her training techniques with the advice from Holly’s chiropractor on good exercises to do for Holly’s health and developed a plan that we could do as homework during the week. Caroline works with Holly for an hour and gives Holly a little breather after each exercise. You can find out more about the training Caroline and Holly have done by clicking here. 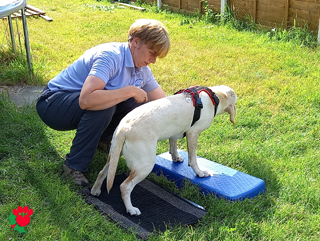 Caroline’s training has helped Holly become more balanced and coordinated. We have concentrated on paw placement and getting Holly to slow down a bit and concentrate on her movements without so much speed (she would love to do zoomies, but it’s too much risk of injury for Holly). Caroline continues to train Holly and we are now working on other things like not barking at the doorbell and “paw”. Caroline has also supported Holly in getting ready for different experiences she may have such as having eye drops and wearing a cone of shame. The partnership between Caroline is amazing with lots of cuddles and love, but also lots of hard work.

In October 2022, Holly met Jo Handley-Howard from Synergy Small Animal Rehabilitation as Holly was diagnosed with bi-lateral hip dysplasia and it was recommended by both, Debenham Vets and Claire Lawrence that hydrotherapy on a water treadmill would benefit Holly.

Holly doesn’t like water and will do anything to get out of being bathed or showered, so the idea of her being in the water and her being able to walk in a straight line on the treadmill was somewhat of an unknown for us and Holly.  However, (Auntie) Jo had worked with dogs with Cerebellar Hypoplasia before and is an expert in working with dogs with various disabilities and additional needs.

Jo ease Holly into the session in such a way that Holly became comfortable with Jo and Holly although anxious, managed to tolerate the water filling up. Jo was very understanding of Holly and each time more water was added or the treadmill started, Jo reassured Holly and explained to us what she was doing and the reasons why.

Jo assessed Holly and after a few sessions and another conversation with the orthopaedic specialist at the vet; it was recommended that Holly have hydrotherapy every 4 weeks with reviews regularly to see how she improves. 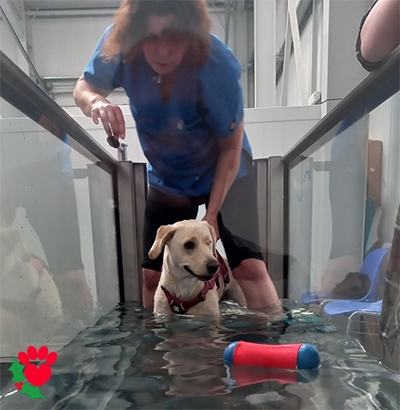